As the July 29th deadline approaches, Windows7/8.x users who have been waiting and watching will have to take a decision on whether to accept the free upgrade to 10 or stick with the current operating system for the time being. Meanwhile there are numerous reports of upgrades being forced onto users and there is a sense of inevitability that, at some point in the near future, even the most vigilant of us will succumb to Microsoft's relentless drive. Short of switching to Linux or Mac, it looks like they're going to get us by hook or by crook, so I've decided to be prepared. Before some Mac fan decides to give me good advice let me just say this: Forget it. Apple hardware support in India sucks.

Over the last decade, I've done a fair number of projects in various versions of ARCHICAD and I want to be able to access them in future if ever the need arises. With Windows 7, I was able to install ARCHICAD-9 (my earliest version) although the procedure needed some jumping through hoops. With Win10, only ARCHICAD-13 and newer are listed as compatible and Graphisoft has only been fixing things for v18 and 19 on this operating system. If you still want to run old versions of ARCHICAD on Windows,  you'll have to install WindowsXP in a virtual machine.

Instead, I decided to open up and save all my old projects in the current version of ARCHICAD. That means migrating all the files and libraries. This is something I've almost never done on a live project but feel comfortable enough doing it on completed ones. While going through this exercise, I came across a few things that I thought might be useful to someone in the same boat as myself. 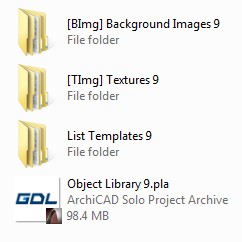 ARCHICAD does a pretty decent job as long as the project files are v13 or newer but won't automatically load migration libraries from 10, 11 and 12. At first I thought they didn't exist but a search on archicad-talk revealed that they do!


That still doesn't solve the problem of v.9 so you'll either have to use the file converter or load the original library. In fact, it might be a good practice to keep copies of the libraries of previously installed versions in case the process fails or you only want to use the original objects.

In the past, I've never saved my old projects as .pla files and not sure whether I should have or not. After migration, the old objects would simply get embedded. 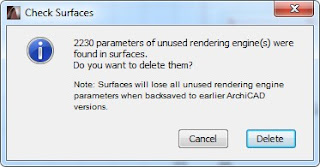 The one place where you are likely to face more trouble than object libraries is with surfaces (formerly materials). Despite migrating objects successfully, there is a good chance that the library loading report will complain about a bunch of missing attributes. With the switch from Lightworks to CineRender, a lot of things changed so it is worthwhile removing unnecessary parameters.

Sometimes this fixes the problem and sometimes it doesn't.


For some reason many of my saved 3D views in the old files showed up as blank. I found that removing the sun object sorted out the problem. With CineRender, I don't feel the need for the sun object any more so it was a quick and effective fix. I haven't yet figured out what exactly caused the problem. Let me clarify, though, that it wasn't the sun object itself but certain settings of the sun object that led to a (seemingly?) empty 3D view.


Now that I've migrated all the important projects from older versions I feel a lot more confident about facing the inevitable. Of course, the bigger question of whether or not to move to Windows 10 in the near future still remains; and while you're reading this, Microsoft is thinking up all sorts of ways to take that decision out of your hands.

Posted by Vistasp Mehta at 6:54 PM