In the AC-Depository, there is a tile object called "Tiles with variable colours" by Zach Dimitorv which I thought would be a useful if extended and improved.  Wrote to him at the email ID given in the script but have no reply. Given that he's only made two posts on the forum, I wonder if he's moved on.

Anyway, for a current project I needed to have closely related colours on a tiled wall so I had to explore the RND function for the first time. It quickly became apparent that the way ArchiCAD generates random numbers isn't exactly random.  Searched the AC-Talk forum and first thread that popped up was from as far back as 2004 - and it talked about exactly this problem. Oleg helped out with a little trick to make the numbers more random and Karl gave not just a nice explanation of pseudo-random but also a test object with what he calls the "goofy function".  As usual, I learned a lot!

For whatever it's worth, what you see on the left is one of the things that can now be achieved with this object.  If anyone is in touch with Zach, please tell me how to contact him so I can give him the updated object.  Below is a screenshot of the parameters used.

Edit: Zach (Zahari Dimitrov) just responded to my message and I'll be in touch with him about extending the object further. 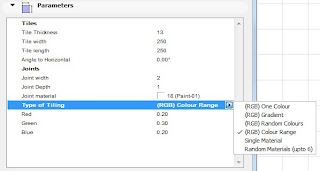 Posted by Vistasp Mehta at 9:30 PM